Can Saving Wasted Food Contribute to Ending Hunger in the Arab Region?

Can Saving Wasted Food Contribute to Ending Hunger in the Arab Region?

A recent FAO study showed that roughly more than one-third of food is lost or wasted globally. Reducing high food loss and waste would end hunger and achieve worldwide food security in the long-run. In some regions—such as in the Arab states—reducing food loss and waste is vital since they have limited possibilities to increase their production and they depend on imports to reach their basic food needs. Overall, almost one third of the food is wasted in the Arab region.

In contrast with some other regions, where much food is wasted during consumption; in the Arab region, 44% of food loss occurs during pre/post-harvesting and 34% at the consumption stage. The table below gives an estimate of waste percentages within food commodity groups at various stages in the process for North Africa, West and Central Asia.

Estimated/assumed waste percentages for each commodity group in each step of the FSC for North Africa, West, and Central Asia

In Egypt in 2006, a food bank model was created and it is showing significant results in feeding hungry Egyptian families while simultaneously reducing the quantity of wasted food within the country. The Egyptian Food Bank (EFB) started its “Saving Wasted Food” awareness program in cooperation with the Egyptian Hotels Association, distributing all untouched or unused saved food from participating hotels to feed insecure people living within the region of the hotels. They started in 2006 by distributing 1.22 million meals on a monthly basis; by 2013, that number had risen to 16.6 million meals a month. As a result of such rapid outreach and success, the Egyptian Food Bank is now working with different countries in the Arab region—Lebanon, Jordan and Saudi Arabia, among others—to open food banks along the lines of similar principles.

The EFB has boldly set its key target as ending hunger in Egypt by 2020. To achieve this, it will continue to promote and scale up its key successes within Egypt, and will also endeavor to embed these principles in projects in neighboring countries. The first step is information and education. That includes introducing the food bank concept to communities and emphasize its role in fighting hunger, while at the same time spreading awareness - especially in the private sector - of the problem of food waste and loss. Once community allies and organizational partners have been recruited, a minimum level of infrastructure such as; the establishment of food storage and/or pick-up points and transportation of the food, are essential to ensuring the sustainability of a food bank. Coordination with civil society groups and community volunteers is also essential in reflecting community priorities and keeping resource costs low. Finally, the EFB aims to go the next step by raising awareness around waste in food systems and its impact on hunger among policy makers and institutions, especially at the local level. 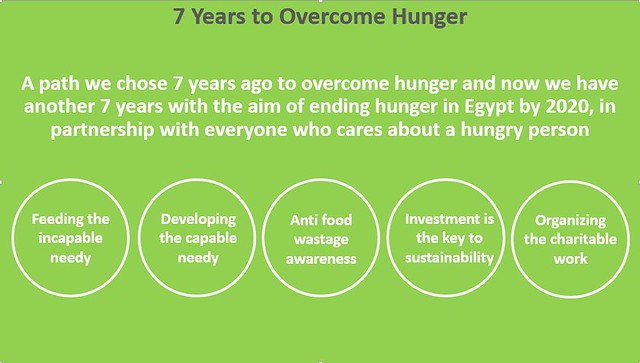 In the experience of the EFB, the positive knock-on effects of food bank programs are numerous. Food banks—and the networks they develop—can create job opportunities and improved community cohesion in the form of infrastructure (i.e., the logistics that keep the banks running) and partnerships (between citizens, private sector, civil society and public institutions). Vulnerable households gain a new resource to help strengthen their resilience during difficult times, and children benefit from the assurance of their basic nutrition needs being met. There are also important environmental gains by reducing food-related waste going to landfills. Overall, food banks have the potential to contribute to more inclusive, sustainable development given their ability to minimize food loss and waste within communities whilst at the same time improving food availability, quality and affordability to the poor.